The Dunmore Pineapple in Scotland 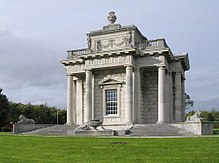 Modern reconstruction of the Turkish Tent, a permanent structure at Painshill, Surrey

In architecture, a folly is a building constructed primarily for decoration, but suggesting through its appearance some other purpose, or of such extravagant appearance that it transcends the range of garden ornaments usually associated with the class of buildings to which it belongs.

In English, the term began as “a popular name for any costly structure considered to have shown folly in the builder”, the OED‘s definition,[2] and were often named after the individual who commissioned or designed the project. The connotations of silliness or madness in this definition is in accord with the general meaning of the French word “folie”; however, another older meaning of this word is “delight” or “favourite abode”.[3] This sense included conventional, practical, buildings that were thought unduly large or expensive, such as Beckford’s Folly, an extremely expensive early Gothic Revival country house that collapsed under the weight of its tower in 1825, 12 years after completion. As a general term, “folly” is usually applied to a small building that appears to have no practical purpose or the purpose of which appears less important than its striking and unusual design, but the term is ultimately subjective, so a precise definition is not possible. 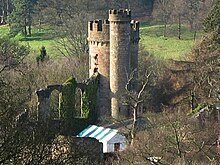 Hagley Castle is in the grounds of Hagley Hall. It was built by Sanderson Miller for George, Lord Lyttelton in the middle of the 18th century to look like a small ruined medieval castle.[4]

The concept of the folly is subjective and it has been suggested that the definition of a folly “lies in the eyes of the beholder”.[5] Typical characteristics include:

The Pantheon at Stourhead estate

Follies began as decorative accents on the great estates of the late 16th century and early 17th century but they flourished especially in the two centuries which followed. Many estates had ruins of monastic houses and (in Italy) Roman villas; others, lacking such buildings, constructed their own sham versions of these romanticstructures.

However, very few follies are completely without a practical purpose. Apart from their decorative aspect, many originally had a use which was lost later, such as hunting towers. Follies are misunderstood structures, according to The Folly Fellowship, a charity that exists to celebrate the history and splendour of these often neglected buildings.[citation needed] 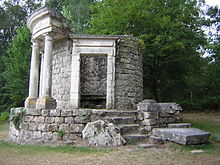 The Temple of Philosophy at Ermenonville

Follies (French: fabriques) were an important feature of the English garden and French landscape garden in the 18th century, such as Stowe and Stourhead in England and Ermenonville and the gardens of Versailles in France. They were usually in the form of Roman temples, ruined Gothic abbeys, or Egyptian pyramids. Painshill Park in Surrey contained almost a full set, with a large Gothic tower and various other Gothic buildings, a Roman temple, a hermit’s retreat with resident hermit, a Turkish tent, a shell-encrusted water grotto and other features. In France they sometimes took the form of romantic farmhouses, mills and cottages, as in Marie Antoinette‘s Hameau de la Reine at Versailles. Sometimes they were copied from landscape paintings by painters such as Claude Lorrainand Hubert Robert. Often, they had symbolic importance, illustrating the virtues of ancient Rome, or the virtues of country life. The temple of philosophy at Ermenonville, left unfinished,[7] symbolised that knowledge would never be complete,[clarification needed] while the temple of modern virtues at Stowe was deliberately ruined, to show the decay of contemporary morals.[citation needed]

Later in the 18th century, the follies became more exotic, representing other parts of the world, including Chinese pagodas, Japanese bridges, and Tatar tents.[8]

The Irish Potato Famine of 1845–49 led to the building of several follies in order to provide relief to the poor without robbing them of their dignity by issuing unconditional handouts. However, to hire the needy for work on useful projects would deprive existing workers of their jobs. Thus, construction projects termed “famine follies” came to be built. These included roads in the middle of nowhere, between two seemingly random points, screen and estate walls, piers in the middle of bogs, etc.[9]

Follies are found worldwide, but they are particularly abundant in Great Britain.[10] 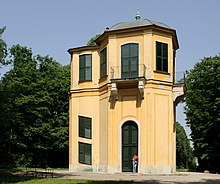 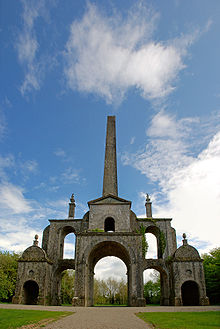 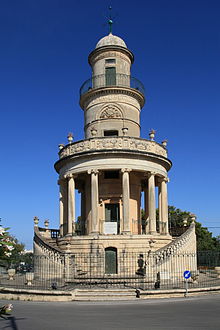 Temple of the Sibyl in the grounds of the Czartoryski Palace in Puławy, Poland 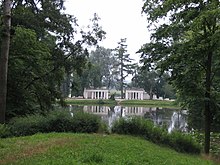 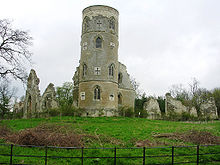 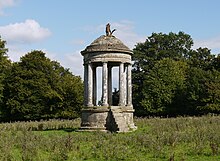 The Beacon: One of the remaining follies at Staunton Country Park originally commissioned by George Thomas Staunton and designed by Lewis Vulliamy

The Secret Religion that Rules the World