A gravity hill, also known as a magnetic hill, mystery hill, mystery spot, gravity road, or anti-gravity hill, is a place where the layout of the surrounding land produces an optical illusion, making a slight downhill slope appear to be an uphill slope. Thus, a car left out of gear will appear to be rolling uphill against gravity.[1] There are hundreds of recognised gravity hills around the world.

The slope of gravity hills is an optical illusion,[2] although sites are often accompanied by claims that magnetic or supernatural forces are at work. The most important factor contributing to the illusion is a completely or mostly obstructed horizon. Without a horizon, it becomes difficult to judge the slope of a surface as a reliable reference is missing. Objects which one would normally assume to be more or less perpendicular to the ground, such as trees, may actually be leaning, offsetting the visual reference.[3]

The illusion is similar to the Ames room, in which objects can also appear to roll against gravity. 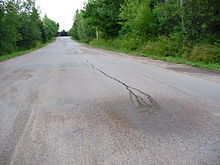 A similar phenomenon—an uphill road that appears flat—is known in bicycle racing as a “false flat“.[4]

An Ode to a Hometown Creature: Mothman of Point Pleasant, West Virginia

BBC – The Code – The Wisdom of the Crowd

The Secret Religion that Rules the World